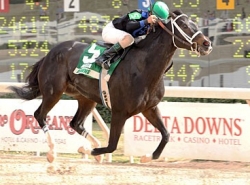 The Delta Jackpot is one of the final graded stakes races of the year for two-year-olds and with a lucrative purse of $1 million, it typically attracts a deep and contentious field. It is the second-richest race in North America for two-year-olds, second only to the Breeders’ Cup Juvenile. Since the inaugural running in 2002, the mile and a sixteenth race has attracted promising young stars from across the country to compete at Delta Downs in Louisiana. In 2005, the Delta Jackpot was cancelled due to a hurricane.

The history of the Delta Jackpot is relatively limited since the inception of the race in 2002. For the first three editions, the $1 million race did not have graded stakes status. In 2006, the race was recognized as a Grade 3 event and from that point onward began to attract stronger fields of two-year-olds with connections eyeing the Triple Crown in the spring. [+]

One of the most exciting editions of the Delta Jackpot came in 2010 when Gourmet Dinner, an invader from Florida, pulled off the upset at odds of 20-1. He drew off impressively and stamped himself as a contender to watch for the next year. While he was not a factor in the Triple Crown, he did hit the board in two major Kentucky Derby prep races before going to the sidelines.

The most successful horse to win the Delta Jackpot is unequivocally Goldencents. In 2012, after a runner-up effort in the Champagne (G1), he went to Louisiana and earned a big payday in the Delta Jackpot. It was a preview of things to come for the talented colt who would go on to win a total of seven races including back to back editions of the $1 million Breeders’ Cup Dirt Mile (G1).

While the 2014 Delta Jackpot was marked by an excellent duel throughout the race between the top two choices, 5-2 Ocho Ocho Ocho and 3-1 Mr. Z, it was perhaps 23-1 Far Right who had the best run of the race, overcoming big traffic trouble to rally for third, and key a $347 trifecta on a $2 bet. Finding that big bomber to fill out the bottom of your exotic ticket at Bovada's racebook is a great way to hit big payouts and cash back bonuses.

A field of 10 is expected to go to the gate for the 2015 (G3) Delta Downs Jackpot Stakes, led by 2-1 morning line favorite Exaggerator. The Kentucky-bred son of Curlin will be coming back on short rest, after having run fourth in the Breeders' Cup Juvenile as the 5-1 co-second choice. Trained by Keith Desormeaux and ridden by his brother Kent, Exaggerator comes in with a record of two wins from five lifetime starts, including a win in the the (G2) Saratoga Special in mid-August.

In what looks on paper to be a competitive field, second choice in the ML is 7-2 Sunny Ridge, a New Jersey bred that last time out raced near the lead throughout before being caught in the last 1/16th to finish second in the (G1) Champagne. He has two wins in four career starts. At 8-1 in the ML, Whitmore appears to be an intriguing possibility on the exotics. Although making only his second lifetime start, he won at first asking three weeks ago at Churchill, sitting behind early fast fractions before going five wide to take over at the top of the lane to pull away and win by more than 7 lengths, despite veering out in mid-stretch.