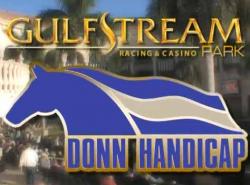 Considered one of the premier races for older thoroughbred horses during the winter racing season in the United States, the Donn Handicap has been held at Florida’s Gulfstream Park every year since 1959. The race is named for the Donn family, who for many years owned and operated Gulfstream, and of whom three family members have served as president of the track. Originally run at 1 1/2 miles in the turf, since 1965 the Donn has been run at 1 1/8 miles on the dirt.

Open to horses aged four-years-old and up, since 1988 the Donn has been classified as a Grade I race. Originally offering a purse of $60,000, it now has a total prize offering of $500,000. While it would seem a natural progression from one year to the next, it’s interesting to note that only one horse – Foolish Pleasure – has won the Kentucky Derby as a three-year-old (1975) and come back the next year to win the Donn as a four-year-old, in the only year the Donn was run as a 7-furlong sprint. Foolish Pleasure is also known for just missing the US Triple Crown when he finished second in both the Preakness and Belmont Stakes. [+]

In the first two years of the Donn Handicap, 1959 and 1960, One-Eyed King was the repeat winner of the race, and eventually there would be two other repeat winners, Pistols and Roses and the legendary Cigar, all occurring during a four-year span from 1993-’96. Two other horses Cryptoclearance (1988-’89) and Skip Away (1997-’98) would finish second in their first attempt at the Donn, only to come back and win it the next year. In 2002, Cryptoclearance’s son, Volponi, won the Breeder’s Cup Classic at odds of 44-1, defeating Harlan’s Holiday and Medaglia d’Oro, both of whom would go on to win the Donn in the next two years.

At the current distance, the record time for the Donn Handicap has been held since 1979 by Jumping Hill, who covered the distance in 1:46.40, the only time the race has been run in under 1:47. In terms of human participation, Hall of Fame Jockey Jerry Bailey won the race six times, twice with Cigar, while Todd Pletcher holds the record for trainer wins with three, including the 2013 race won by Graydar. In recent years, the Donn Handicap has been used as a prep race for horses shipping over to compete in the world’s richest horse race, the $10 million Dubai World Cup.

With a pair of strong favorites in the 2015 Donn Handicap, smart horseplayers were looking for a possible longshot to round out the trifecta, and some found just that in the form of 17-1 Einaawi, who went five wide on the turn and got up to third in time to trigger a $125.00 trifecta payout. Horseplayers who made their exotic bet through Bovada or one of our other recommened racebooks added to that with a cash back return, one of the best reasons to wager through an online racebook.

The 2016 edition of the Donn Handicap (G1) drew a field of eight of the top older horses in the country with several contenders using the race as a prep for the Dubai World Cup (G1) the following month.

Mshawish, winner of the Hal’s Hope Stakes (G3) in his previous start at Gulfstream Park, topped a trio of horses entered for trainer Todd Pletcher. Keen Ice, the upset winner of the Travers Stakes (G1) the year before, went to the gate as the favorite. The consistent Valid contested the pace with longshot Financial Modeling before putting away that rival, only to have to contend with a rally from Mshawish who had stalked the pace. Mshawish opened up to win by two lengths. Keen Ice failed to be a factor and finished sixth.

Valid, despite a scary ordeal in the Gulfstream Park Handicap (G2), came back to win the Skip Away Stakes (G2). Mshawish was sixth in the Dubai World Cup (G1).

Check back closer to race time for the 2017 Donn Handicap!