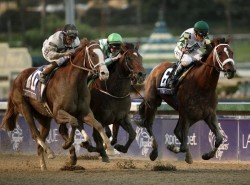 The Breeders' Cup Classic is the richest and one of the most coveted thoroughbred races in North America. Since its inception in 1984, the [+]

Breeders' Cup World Championships has grown in popularity and now factors heavily in crowning end-of-the-year champions in each category at the Eclipse Awards. The Breeders' Cup Classic is run at a mile and quarter on the main track which is often referred to as the “classic” distance for horse races in the United States. The Breeders' Cup venue rotates from year to year while some tracks have hosted in consecutive years.

With a purse of $5 million, the Breeders' Cup Classic is by far the most lucrative race in North America and ranks behind only the Dubai World Cup, Japan Cup, Melbourne Cup, and Prix de l’Arc de Triomphe internationally. Twice the race has been run on a synthetic surface – 2008 and 2009 – when hosted at Santa Anita Race Course which has now restored its natural dirt surface. Santa Anita and Churchill Downs have hosted the Breeders' Cup more times than any other venues.

Past winners of the BC Classic represent the very best horses in recent American racing history. From 1987-1990, the Classic was won by Kentucky Derby winners Ferdinand, Alysheba, Sunday Silence, and Unbridled. Belmont champion and legendary sire, A.P. Indy, won in 1992 and the great Cigar took the 1995 edition. Tiznow became the first two-time winner of the Breeders' Cup Classic winning back-to-back renewals in 2000 and 2001. Tiznow’s 2000 victory at Churchill Downs featured a dramatic finish as he narrowly defeated European champion Giant’s Causeway in a race that perhaps best illustrates the international appeal of the event.

In 2002, Volponi became the first European-based horse to win the Classic and the biggest long-shot winner at odds of greater than 100/1. Zenyatta made history in 2009, becoming the first filly to win the Classic. In 2010, she came up just a nose short of repeating the feat as she couldn’t catch Blame at the wire.  In total, the Breeders' Cup Classic has produced 11 Horse of the Year award winners.

The 2014 Classic featured one of the strongest fields in years, headlined by Kentucky Derby and Preakness Stakes winner California Chrome, along with Shared Belief, who went into the race unbeaten in 7 lifetime starts, and Tonalist, the 11-1 winner of the Belmont Stakes. But when the gates opened, it was the speedy Bayern who, with the help of a somewhat controversial hard left out of the gate by jockey Martin Garcia, broke to the front and then held on in a photo finish that saw three horses seperated by less than a neck at the wire.

While the 2014 race was star-studded, the 2015 Breeders' Cup Classic is likely to feature a superstar, in the form of American Pharoah, the first US Triple Crown winner in 37 years. Between now and late October, we'll find out who will be lining up against the heavy favorite, as major summer preps such the Travers Stakes, Whitney Handicap, Woodbine Mile and more will be run. In the meantime, top racebooks will be offering some nice prices in their future wagers on possible rivals for the favored champ, including Bovada, our #1 rated racebook.

The 2015 Breeders' Cup Classic was the final showcase for Triple Crown winner American Pharoah before he was retired to stud duty, and the Bob Baffert trainee didn't disappoint, taking the race with ease. Prior to the Classic, American Pharoah had run second in the (G1) Travers Stakes, breaking a streak of eight consecutive wins.