Moreno Could Be a Live Long Shot in BC Classic 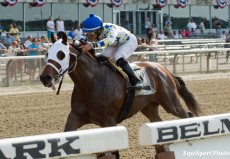 Bettors tend to be fickle in nature, and horse bettors can be the worst offenders.  In essence, this is why Moreno is sure to be a fat price in the Breeders’ Cup Classic in a race he can surely win.  First, let’s consider the reasons bettors aren’t likely to be lining up to bet the Eric Guillot trainee despite his ultra-impressive Grade 1 triumph August 2 in the Whitney.  For starters, Moreno has lost twice since the Whitney, getting run down my Itsmyluckyday in the Woodward, and running fourth in the Jockey Club Gold Cup after a rough trip on a Belmont Park track he has clearly never cared for.

Bettors will dwell on Moreno's flaws

The betting public is also sure to make note of Moreno’s dismal lifetime record:  3 for 22.  This point is valid, but it doesn’t always take a great horse to win the Classic.  In fact, the last three BC Classic winners (Drosselmeyer 2011, Fort Larned 2012, and Mucho Macho Man 2013) were anything but win machines.  Moreno’s speed figures and grade one performances are certainly comparable to any of those runners’.

Bettors are also sure to point out Moreno’s performance in last year’s classic where the son of Ghostzapper (who happens to be a BC Classic winner himself) ran tenth.  That performance, however, might as well be ancient history in the context of horse racing.  To boot, the 2013 Classic was full of quality speed horses such as Game On Dude, Fort Larned, and Mucho Macho Man.  This year’s classic looks conspicuously devoid of early lick.   So maybe, just maybe, Moreno is a long-shot runner who can make a major impact on the 2014 Classic.