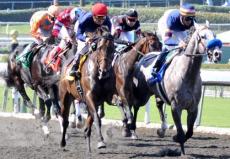 Reigning champion juvenile Shared Belief will put his undefeated streak on the line in the $500,000 Los Alamitos Derby. The Grade 2 race for three-year-olds has drawn a field of seven and will be run at a mile and an eighth.

Shared Belief has been named the heavy favorite on the morning line at 4-5. The Eclipse Award winner as a two-year-old, he was sidelined through the Triple Crown with nagging physical ailments. Trained by Jerry Hollendorfer, the sophomore son of Candy Ride (ARG) will be ridden for the first time by Hall of Fame jockey Mike Smith. In addition, after four consecutive victories on synthetic surfaces he will try conventional dirt for the first time.

Breaking from the outside in the field is Candy Boy, second choice at 5-2 for trainer John Sadler. Also a son of Candy Ride, Candy Boy will be ridden by Joe Talamo for the first time and will be making his first start since a troubled trip in the Kentucky Derby in which he wound up thirteenth. He won the Robert B. Lewis Stakes (G2) early in the year and has two wins from eight total starts.

Can the Man is a potential star on the rise

Bob Baffert will saddle the promising three-year-old Can the Man who has been tabbed at 6-1 on the morning line. Regular rider Martin Garcia will be aboard and the three-year-old son of Into Mischief won his only other start this year, the Affirmed Stakes (G3) at Santa Anita in June. A $320,000 purchase as a juvenile, the bay colt has won three of his five outings.