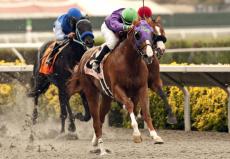 Are you ready for this? The eyes of the world, those of horse racing aficionados and casual observers alike, will be on Belmont Park in Elmont, New York, this weekend for the 146th running of the Belmont Stakes. That’s because California Chrome, a rags to riches 3-year old chestnut colt with white stockings and a stunning white blaze, is attempting to become the first USA horse racing Triple Crown Champion since the amazing Affirmed turned the trick back in 1978. A field of 11 thoroughbreds head to the gate for the Test of the Champion at 6:52 PM ET on June 7, 2014.

California Chrome, bred by co-owners Perry Martin and Steve Coburn for just $10,500 ($8,000 for his unproven mare Love the Chase and $2,500 for his equally obscure sire Lucky Pulpit) has captured the hearts of the horse racing world. A winner of six straight races, including the Santa Anita Derby, the Kentucky Derby and the Preakness Stakes, CC is the 3/5 morning line favorite and will start from PP #2 which is the same post position drawn by Secretariat in the 1973 Belmont Stakes – an omen perhaps?

Wicked Strong (6/1) who captured the G1 Wood Memorial prior to finishing fourth in the Kentucky Derby and Tonalist (8-1) who won the G2 Peter Pan, a traditional Belmont Stakes prep race, round out the top three Belmont Stakes favorites. Ride on Curlin (12/1) and General A Rod (20/1) are the only horses that challenged California Chrome in both the Kentucky Derby and Preakness Stakes. History will be made when the 12th Triple Crown Champion is crowned at Big Sandy on Saturday.