Bet on The Australian Triple Crown 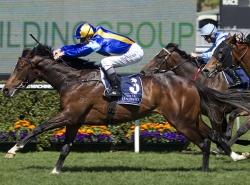 The Australian Triple Crown provides a challenging sequence of races for three year-old horses, comprised of the Randwick Guineas, Rosehill Guineas and Australian Derby. Since the inception of the Randwick Guineas (previously known as the Canterbury Guineas) in 1935, just five horses have managed to capture each of the three legs. Moorland was the first in 1943, followed by Martello Towers in 1959, Imagele in 1973, Octagonal in 1996, and It’s a Dundeel in 2013. The few number of Triple Crown winners and spacing between horses to accomplish the feat speak to the difficulty of winning the three races that are run at distances of 1600 meters, 2000 meters and 2400 meters. Only truly exceptional horses possess the ability, consistency and versatility to win against top class company under such conditions much like the American Triple Crown. 28 runners have captured two thirds of the Australian Triple Crown since 1935.

Bet on the Australian Triple Crown or other classic Australian races through one of these recommended racebooks.

Inaugurated as the Canterbury Guineas in 1935, the Randwick Guineas, run at Randwick Racecourse, assumed its current name in 2006 and comprises the first leg of the Australian Triple Crown. The race is run at 1600 meters making it the shortest of the three events. Currently offered for a purse of $1 million, the Randwick Guineas is run in March as part of the Sydney Autumn Carnival. The winner of the Randwick Guineas is an automatic qualifier for the Australian Derby and Doncaster Mile. The race assumed its Group 1 status in 1980 and has been run at a variety of distances and held at four different racing venues. Since its renaming in 2006, the race has been held at Warwick Farms Racecourse twice -  2011 and 2013 – while Randwick has held the event every other year.

The Rosehill Guineas is the second leg of the Australian Triple Crown and is held annually in March at Rosehill Gardens Racecourse in Sydney. The event is currently offered for a purse of $600,000 and run over a distance of 2000 meters. In its illustrious history notable runners such as Phar Lap, Ajax, Octagonal and Tie the Knot are among the past winners. The event has been held consecutively since 1910 with the exception of 1978. Danwin (1995) and Octagonal (1996) hold the speed record for the 2000 meter race, with each horse stopping the official timer in 1:59.99.

The oldest and longest of the Australian Triple Crown Races, the Australian Derby is held at Randwick Racecourse as part of the Sydney ATC Championships Carnival each autumn. Inagurated in 1861, the 2400 meter race is offered for a purse of $2 million and is considered the most prestigious event for three year-olds on the Australian and New Zealand racing calendar. The brilliant Triple Crown winner Octagonal set the speed record in 1996 with a time of 2:28.41. In addition, many of the all-time greats such as Phar Lap, Tullloch, and Peter Pan have won the historically significant race. The race is commonly referred to as the AJC (Austrailian Jockey Club) Derby despite its official title of the AJC Austrailian Derby.