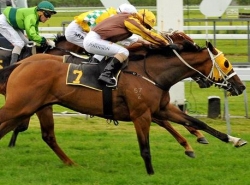 One of the most prestigious races in Australia, the Australian Derby is a Group 1 race for three-year-olds that is held every fall at Randwick Racecourse in Sydney, Australia. This is the premier race for three-year-olds and it offers a purse of $2 million. Traditionally, the race is run at about a mile and a half on the turf and the distance is officially listed as 2400 meters. The Australian Derby has been won by some of the all-time greats in the sport of Thoroughbred horse racing and the most notable winner may have been the immortal Phar Lap who won in 1929.

The race was inaugurated in 1861 and known then as the Randwick Derby. Several years later, the race was rechristened the AJC Australia Derby in 1865. Over the years, there have been some variations on that name and it became officially known as the AJC Australian Derby in 1994. The AJC stands for the Australian Jockey Club. The race began with the intention of being strictly for potential stallions and from 1932 to 1956, geldings were not permitted to enter the race as is still the standard in some European classic races.

Bet on the Australian Derby or other classic Australian races through one of these recommended racebooks.

The 2016 edition of the Australian Derby shaped up to be a memorable event. The favorite, Tarzino, was a handful prior to the start of the race and left his race in the saddling area. The best he could manage was fourth.

After finishing sixth in the New Zealand Derby after a slow start but closing with a flourish at the end, all eyes were on Tavago, a longshot at 30-1, and his new rider, jockey Tommy Berry. After a successful start, it was smooth sailing for the pair and they settled comfortably off of the front-runners. In the straightaway, he changed gears and blew past the leaders to win by 3 ¼ lengths. Jameka finished second followed by Tally in the show position.

It was the third career victory for the son of Tavistock who also sired the favorite, Tarzino. Tavago improved his record to three wins and two seconds from seven starts.