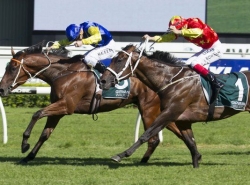 The Randwick Guineas is the first jewel of Australia’s Triple Crown and is held annually in March as part of the Sydney Autumn Carnival at Randwick Racecourse. Restricted to three-year-olds, the Group 1 race is the shortest of the Triple Crown events and is held at 1600 meters, or just under 8 furlongs and holds a purse of $1 milliom. The remaining Triple Crown races include the 2000 meter Rosehill Guineas and the 2400 meter Australian Derby.

The inaugural edition of the race was in 1935 but it was held under a different name – the Canterbury Guineas. Just like the name has evolved over the years, so has the distance. Originally, the race was contested at around 1850 meters and continued to lengthen from there, ultimately being held at 1900 meters. When the race was rechristened as the Randwick Guineas in 2006, the distance was shortened to the current one of 1600 meters.

Bet the Randwick Guineas and other top Australian horse races with one of these recommended raceooks.

Some of the top Australian racehorses in history have used the Randwick Guineas as a stepping stone to great accomplishments including Triple Crown champions such as It’s a Dundeel (2013), Octagonal (1996), Imagele (1973), Martello Towers (1959) and Moorland (1943).

The 2016 Randwick Guineas was billed as a coronation for the highly regarded Press Statement. Longshot Le Romain, a plain, bay gelded son of Hard Spun, was all but forgotten.

Ridden by Christian Reith, he sat off of the pace and the jockey expertly kept track of where Press Statement was during the early stages of the race. At the top of the very long straightaway, Le Romain kicked into gear from the three-path and got the jump on the favorite. He gallantly held him off to win by a neck, returning $21 and pulling off a significant upset. An even bigger longshot, Gold Ambition, finished third while Stay With Me rounded out the superfecta.

Le Romain improved his record to three wins and four placings from eight starts and, with a bankroll of almost $800,000 in earnings, will be a forgotten longshot no more.