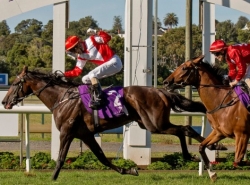 One of the most prestigious races in Australia for three-year-olds, the Rosehill Guineas is held every March at Rosehill Gardens Racecourse in Sydney. The race is run at the distance of 2000 meters or, about a mile and a quarter, and it is held on the turf. The purse is currently $600,000. The Rosehill Guineas is the second leg of the Australian Triple Crown which includes the Randwick Guineas and the Australian Derby.

The Rosehill Guineas was inaugurated in 1910 and has undergone several changes over the history of the race. At the beginning, it was contested at 1400 meters (about seven furlongs) until 1914. From there, the distance increased to 1800 meters (about a mile and an eighth) until 1948 when the distance continued to change to the class length of a 2000 meters or a mile and a quarter. The race did not receive Group 1 status until 1980 and has held that since.

Some of the greatest horses in Australian racing lore have won the Rosehill Guneas as part of their remarkable careers including Phar Lap in 1929, Dulcify in 1979 and Strawberry Road in 1983.

Bet on the Rosehill Guineas or other classic Australian races through one of these recommended racebooks.

In 2016, Tarzino entered the Rosehill Guineas with something to prove. Already a Group 1 winner in the Victoria Derby, he was given some time off following that win and had been unlucky in two starts since his return. He was fourth in the Autumn Stakes (G2) sprinting and then suffered a narrow defeat in the Australian Guineas (G1). It was a controversial race and his rider, Craig Newitt, claimed foul for an incident in the stretch that was not upheld.

In the Rosehill Guineas, however, the horse that won the Victoria Derby impressively returned to the winner’s circle. With a sharp break, he rated off of the front-runners and drew even with the talented Group 1 winning filly Jameka as they turned for home. She fought back gamely but he proved to be too much and drew off comfortably. Monaigne (NZ) got up for second and Jameka held on for third.