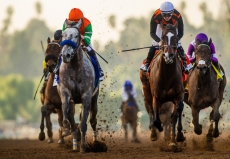 On Saturday May 18 Baltimore's Pimlico Race Course will play host to the 2019 Preakness Stakes. Although Kentucky Derby winner Country House will skip the race with an illness, the Preakness has drawn a wide-open field of 12. They'll be racing 1 3/16 miles on the Preakness dirt for a total purse of $1.5 million.

Post time for the race is expected to be 6:45 PM Eastern and it will be broadcast live on NBC TV. Here's a look at the field with the latest odds from Bovada's online racebook.

Improbable is trained by Bob Baffert and will be ridden by Mike Smith, the same combination that took Justify to a Preakness win and Triple Crown in 2018. He was the favorite for the Kentucky Derby where he ran fifth before being moved up to fourth with the DQ of Maximum Security. Prior to that he was second in both the (G2) Rebel Stakes and (G1) Arkansas Derby.

War Of Will was one of the horses caught up in the traffic problems in the Derby that led to the disqualification of Maximum Security, ultimately being placed seventh. He was one of the best horses in the US to start the year, reeling off three straight wins, but lost his footing and was injured in the (G1) Louisiana Derby where he finished ninth.

Alwaysmining has won six consecutive races, all in his home state of Maryland. Last out he won the Federico Tesio Stakes by 11 lengths. Now he steps up and tries graded-stakes company for the first time. Should be pressing the pace.

Bourbon War is one of several late closers in the field and is likely to get a fast pace up front to try and run down. In his last race he finished third in the (G1) Florida Derby, more than seven lengths behind Maximum Security and four lengths back of Bodexpress who is also in this field.

Owendale is another of the deep closers in here, and one of two horses in the race for trainer Brad Cox. He comes in off  a 1 3/4 length win in the (G3) Lexington Stakes where he moved from eighth at the half-mile marker to first by the time they hit the top of the stretch.

Anothertwistoffate has all of his wins on the synthetic track at Golden Gate Fields but he has been runner-up in both of his last two starts, just beaten by Owendale in the Lexington after running second by a neck to Kentucky Derby starter Cutting Humor in the (G3) Sunland Derby.

Win Win Win was in the money in all six of his first lifetime starts on tracks rated fast or good until running tenth in the sloppy conditions at Churchill Downs for the Derby. His grandsires on both sides - Smarty Jones and Sunday Silence - were Preakness winners.

Signalman just missed making the Kentucky Derby field when he finished 22nd in the Derby points qualifying table, two spots out of getting into the gate. He was third last out in the (G2) Blue Grass Stakes and two starts back won the (G2) Kentucky Jockey Club Stakes on a sloppy track.

Warrior's Charge was a late addition to the race for trainer Cox, and it can be expected the speedy front runner will be sent running from the gate to try and establish a fast pace for Owendale to try and close into.

Bodexpress is a maiden still looking for his first win, although he ran very well to grab second at odds of 72-1 behind Maximum Security in the Florida Derby. He was right up on the pace in the Kentucky Derby before getting caught up in the traffic trouble at the 5/16ths pole and faded to 14th.

Laughing Fox is another late closer who gets into the Preakness off a win by a neck in the Oaklawn Invitational, his first win above the allowance level. He did get fourth two starts back in the (G1) Arkansas Derby, one length behind Kentucky Derby winner Country House.

Market King is the last horse to draw into the Preakness and has one win to his name in eight lifetime starts. Although that victory did come at 1 1/16 miles, last out he was 11th, 37 lengths behind the winner Vekoma in the 1 1/8 miles Blue Grass.

Get future bets and updated odds on race day with one of these highly rated online racebooks.