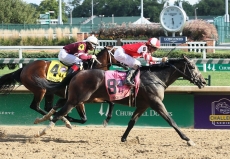 The 145th running of the Kentucky Derby goes Saturday afternoon from Churchill Downs, with a full field of three-year-old thorougbreds racing 1 1/4 miles on the Churchill dirt track, gunning for a share of the $3 million total purse and the first jewel of the US Triple Crown. Post time is expected to be 6:50 PM Eastern.

The race has already seen some drama, as the pre-race morning line favorite Omaha Beach was scratched on Wednesday night due to a breathing issue, and on Thursday came word that long shot Haikal has a foot problem and may miss the race as well.

With Omaha Beach out, Bodexpress draws in. If Haikal scratches it would leave 19 runners in the field, with all horses outside of Haikal's #11 gate moving in one spot while retaining the same program number.

With all that having been said, here's a look at the contenders and live long shots in the field, with Thursday morning Kentucky Derby horse odds provided by Bovada's online racebook.

Won four straight to begin his career and has finished second twice in 2019. In the most recent of those he couldn't get to Omaha Beach in the stretch of a sloppy Arkansas Derby, so the scratch of that one removes one big obstacle for him on Saturday. Distance seems a question.

He's won three-of-four races on the lead all the way, and it was expected he'd try to go to the front again where he would be continously pushed by Omaha Beach. Like Improbable, that problem has now been removed, and he may try to steal it on the front end.

He looked very good in making a big move on the turn to win the Wood Memorial, but there is likely to be a much slower pace to run at here, and he may have to change his style a bit. That's not really what you want in the biggest race of your life.

He becomes the favorite (knocked down to 9-2 in the morning line) while moving at least one and possibly two spots toward the inside of the gate. All of this works in his favor, and with a decent break he could be the one sitting chilly just off the lead down the backstretch.

Beat Game Winner in the Santa Anita Derby by letting that one do the work upfront and then making a long charge off the final turn. Similar to Tacitus, that might not work here and he may have to try to get up closer to the pace than he likes early on in the race.

He started his career racing on turf - with limited success - but became a different horse when switched to dirt racing. He made the Derby with two prep wins in Louisiana before suffering an injury in the Louisiana Derby where he finished ninth. Lacks overall speed, but has the talent to contend.

Won the Louisiana Derby when War Of Will took a misstep out of the gate, following up on his maiden win in his previous race. To give credit where credit is due, he ran a pretty good race that day in his first try in graded-stakes company, and he's improving every time out. Could be dangerous.

A winner of three-of-four lifetime, with a third-place finish as well, he comes into the Derby off a win in the Blue Grass Stakes where he tracked a fairly solid pace before drawing off impressively to win by 3 1/2 lengths. The final time there was rather slow, so there's a question of how good the competition really was.

A bit inconsistent, he was only fourth to start the season in a restricted stake at Gulfstream in January, but bounced back to win the Fountain Of Youth Stakes in his next start, posting the highest speed figure of his career. Took a step back as a well-beaten third last out in the Florida Derby.

Florida bred has been in the money in all five of his lifetime starts, and last out got up for second in the Blue Grass, despite the fact there wasn't a whole lot of pace to run at. Working against him is the fact the pace here doesn't set up very well for a deep closer.

Check out the recommended online racebooks listed below, and get in your own picks for the "greatest two minutes in sports."