Picks And Preview For The 2016 Belmont Derby Invitational 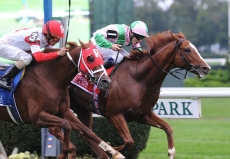 A trio of formidible invaders have shipped in from Ireland and the UK to take on 10 American-based colts in this Saturday's Belmont Derby Invitational. The list is led by 7-2 morning line favorite Long Island Sound, who was bred in Kentucky but makes his first US start in the Derby. Unraced as a juvenile, he won his first three starts at the maiden and handicap level, before running third last out in a Group 3 event at Ascot. He's trained by Aiden O'Brien, who has a pair in the race, including Deauville (4-1) who ran 11th last out in the Epsom Derby, arguably the UK's biggest race. That was over 1 1/2 miles, and the cut back to 1 1/4 and the addition of first-time lasix could tip the balance in his favor.

Camelot Kitten leads the way for the American team

For the Americans, top hopes lie with Camelot Kitten (5-1) who has really only run one bad race in his career when he finished 12th in the 2015 Breeders' Cup Juvenile Turf. Otherwise, he's been first or second in five starts, and comes into this off back-to-back graded stakes wins. Last out he just edged a fast-closing Highland Sky (8-1) who provides real good betting value stretching out to 1 1/4 miles for the first time. Also in the field is Airoforce (10-1) who looked like a superstar in the making last year, but who has failed to live up to the promise in his second year on the track. Distance may be a question here, but he showed last race in running second in the Penn Mile that he may be turning things around for trainer Mark Casse.