The Kentucky Derby Winners of The 2010s 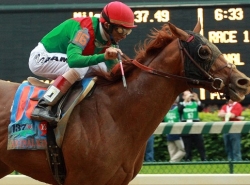 Our full coverage of all the Kentucky Derby winners over the decades looks at the most recent years, when two horses came close to a Triple Crown, and another accompished the feat!

2016 - The winner of the 2015 Breeders' Cup Juvenile, Nyquist came into the Derby undefeated and left with his record intact, winning by 1 1/4 lengths as the favourite at odds of 5-2. He would run third in the Preakness Stakes and then skipped the Belmont.

2015 – Having already shown he could win anywhere, American Pharoah shipped in from California and took the Derby with a powerful stretch run, taking the win by a length at odds of 3-1. He would go on to win the Preakness and Belmont, becoming the first Triple Crown champion in 37 years.

2014 - After a stylish win in the Santa Anita Derby, California Chrome arrived at Churchill Downs the one to beat. The California-bred opened up by at least five lengths in the stretch and won easily while being geared down. He returned to capture the Preakness, but his Triple Crown bid was dashed with a fourth-place Belmont Stakes.

2013 - Sporting a regal pedigree and top class connections, Orb was a popular Kentucky Derby favorite following his win in the Florida Derby. Despite having to overcome a sloppy track, Orb rallied powerfully to win by two and half lengths. Orb finished fourth in the Preakness and third in the Belmont.

Check out our recommended racebooks to make your next bet on a big race!

2012 - Despite a sharp win in the Santa Anita Derby, I’ll Have Another was sent to post at odds of over 15/1. The west coast colt finished strongly to become the first winner of the Kentucky Derby to start from post 19. He returned to win the Preakness over Derby runner-up Bodemeister, but would scratch from the Belmont with a career-ending injury.

2011 - In breaking with any recent Kentucky Derby trends, Animal Kingdom became just the second horse to win the Kentucky Derby with four or fewer starts since 1918, and the first to win off a six-week layoff since 1956. The powerful closer had to settle for second behind Shackleford in the Preakness, and after a troubled trip, ran sixth in the Belmont.

2010 - In a wide open renewal of the Run for the Roses, Super Saver found the sloppy track to his liking and benefitted from another rail-skimming ride from Calvin Borel, who collected his third Derby win in four years. Super Saver came back to finish a disappointing eighth in the Preakness and did not start in the Belmont. The colt would not win another race.