The Kentucky Derby Winners of The 1990s 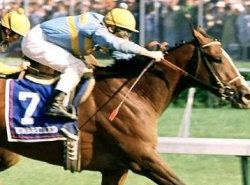 Two of the all time greats in Silver Charm and Real Quiet win back-to-back Derbys in the 1990s, and a legendary jockey gets his only Derby win!

1999 – Three months prior to the Kentucky Derby, Charismatic was entered in a claiming race. Fortunately for owner Bob Lewis, no one claimed the colt which began an improbable run of success that led to a blanket of roses in the winner’s circle. Charismatic returned to win the Preakness Stakes, but was injured in the Belmont and finished third.

1998 – After taking the Kentucky Derby and Preakness in succession, Real Quiet looked as poised as any horse in the last two decades to complete the Triple Crown Sweep. In one of the more heartbreaking finishes in racing memory, however, Real Quiet was defeated by a nose in the Belmont by his main rival Victory Gallop.

1997 – One of the more popular Derby campaigners Silver Charm possessed good looks, talent and put forth tremendous effort in his races. That combination led to a victory in Derby 124 in a thrilling finish over Captain Bodgit and Free House. Silver Charm also won the Preakness and finished a close second in the Belmont.

1996 – Like father, like son. Grindstone, a son of 1990 Kentucky Derby winner, Unbridled, honored his sire with a sparkling performance in the Run for the Roses. The colt was retired less than a week after his Derby score due to knee chips, but went on to become a successful stallion.

1995 – Thunder Gulch had fallen out of favor with much of the betting public despite prep wins in the Fountain of Youth and Florida Derby, but at 25/1, rewarded those who kept the faith in Derby 122. Thunder Gulch was beaten by his stablemate, Timber Country, while finishing third in the Preakness, but rebounded to win the Belmont.

We handicap all of the best online racebooks to help you make winning wagers!

1994 – With horses like Holy Bull and Tabasco Cat commanding most of the wagering, Go For Gin was an afterthought at odds of over 9/1. The colt relished the sloppy track at Churchill Downs and steadily moved forward before sprinting clear in the stretch. He would run second to Tabasco Cat in both the Preakness and Belmont.

1993 – Sea Hero skimmed the rail and easily held off his rivals en route to a Kentucky Derby score for his 71 year-old trainer and 85 year-old owner. The colt finished fifth in the Preakness and seventh in the Belmont.

1992 - With the previous year's Breeders' Cup Juvenile Champion Arazi stealing near all the headlines, the door was left wide open for Lil E. Tee's upset win at odds of 17/1, giving Hall of Fame rider Pat Day his first and only Derby win. The colt would return to run fifith in the Preakness, and did not compete in the Belmont Stakes.

1991 - Featuring a talented crop of three year-old runners, Strike the Gold, proved the best of his generation on the first Saturday in May, defeating the likes of Best Pal, Fly so Free and Hansel. Strike the Gold came back to finish sixth in the Preakness, but redeemed himself by making up close to 20 lengths to run second in the Belmont.

1990 - Unbridled is a name most horse racing fans remember, both for his winning Kentucky Derby effort, Breeders' Cup Classic victory and impact in the breeding shed. The star finished second in the Preakness and Breeders' Cup, but those losses did little to tarnish his legacy.