The Kentucky Derby Winners of The 1980s 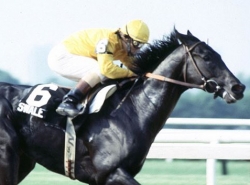 In the 1980s, two fillies capture the Run for the Roses, the second Canadian-bred ever to win makes his run, and the son of a Triple Crown winner hits the wire first!

1989 – Featuring two of the most talented racehorses of the decade, Sunday Silence bested the favored Easy Goer in the Kentucky Derby and again two weeks later as the pair ran 1-2 in in the first two legs of the Triple Crown. Easy Goer, however, wouldn’t be denied on his home track, romping home in the Belmont.

1988 - Winning Colors, a strapping filly from the West Coast, shipped into Churchill Downs and made every pole a winning one to defeat a quality field and become just the third filly to win the illustrious race. She returned to run third in the Preakness and off the board in the Belmont.

1987 – A son of the great Alydar, Alysheba vindicated his father’s runner-up finishes to Affirmed in 1978 with consecutive wins in the Kentucky Derby and Preakness. Alydar finished fourth in the Belmont Stakes.

1986 – Despite entering the Derby off a pair of losses in California and drawing the notably difficult post 1, Ferdinand thrived at the ten furlong distance, earning the victory for his Hall of Fame trainer. The colt finished second and third in the next two legs of the Triple Crown.

1985 – The wickedly fast Spend A Buck blazed his way to a Kentucky Derby win, posting the fourth fastest time in the race’s history at 2:00 1/5. Famously, Spend a Buck’s connections opted to skip the Preakness and Belmont to pursue a large bonus being offered at Garden State Park.

1984 – Swale was a son of the great Seattle Slew, but for much of the prep races leading to the Derby, played second fiddle to his own stablemate Devil’s Bag. When an injury sidelined that runner, Swale proved his own worthiness, winning the Derby in style before finishing seventh in the Preakness and winning the Belmont.

1982 – At 21/1 Gato Del Sol looked like the bettors had gotten it right as he trailed his 18 rivals early, but unleashed a steady closing bid beginning at the 1/2-mile pole to win by two and a half lengths at the wire.

1981 – The well-regarded Pleasant Colony delivered a solid performance, holding off a late charge from Woodchopper to win by three quarters of a length. Pleasant Colony returned to win the Preakness and finish third in the Belmont Stakes.