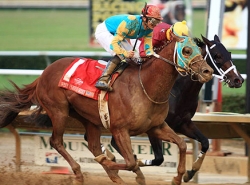 The horse racing industry in West Virginia received a shot in the arm when West Virginia became the first state in the country to install slot machines at race tracks. The expanded gaming allowed for additional revenue streams to keep both West Virginia racetracks, Mountaineer and Charles Town, in operation with expanded racing schedules to practically year-round, although the former has recently reduced their racing dates.

Charles Town opened in 1933 and currently the track races year-round. In 2016, the track will primarily race every Thursday, Friday and Saturday but will add Wednesdays to the mix in from March through June and again from September through December. Their premier race is the $1.25 million Charles Town Classic. The Grade 2 event routinely attracts some of the best older horses in the country and it is held every April. Charles Town also, in an effort to support the local breeding industry, holds the West Virginia Breeders’ Classic day in October.

Mountaineer announced in 2016 that they would be running 160 days of racing and would hold live racing from April through the end of November. The track typically conducts racing five days a week during their season and generally races Saturday through Wednesday and the track races on both turf and dirt during their meet. The highlight of their season is the West Virginia Derby, a Grade 2 race with a purse of $750,000 for three-year-olds. The race is held annually in August.

For those times you can't take in live racing, you can still wager on all the top West Virginia races through an account with one of these excellent online racebooks.