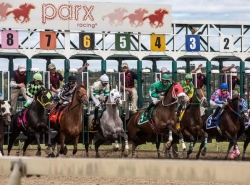 Parx has undergone several name changes since the opening in 1974. Originally Keystone Park, the track then became known as Philadelphia Park and was christened as Parx in 2009. The track races on both the turf and the dirt and their racing season runs from February through December. Their Fall Festival is held in September and October and the highlight of that is the $1 million Pennsylvania Derby (G2) and the Cotillion Stakes (G1) which features some of the best three-year-olds in the country.

Penn National opened in 1972 and has a one mile dirt main track as well as a seven-furlong turf course. The track offers year-round racing that is fueled with revenue from the state’s casinos. Their biggest race of the year is the Penn Mile which is held in June and is a Grade 3 stakes race for three-year-olds on the turf. In 2014, Bobby’s Kitten used the race as a springboard to winning the Breeders’ Cup Turf Sprint (G1).

Live racing begins in March and the harness season runs through the end of November. The track typically hosts 12-16 races each evening.

The newest addition to the Thoroughbred racing scene, Presque Isle Downs opened in 2007 and is the only Thoroughbred track in the state to utilize a synthetic main track – they use the Tapeta surface. Live racing is conducted from May to October and they host several stakes races including the Presque Isle Masters Stakes (G2).

Harrah’s Philadelphia has a 5/8 of a mile track and holds live harness racing begins in April and continues through the middle of December. The track has been in operation since 2006.

The Meadows offers live harness racing year-round at their facility in Washington, Pennsylvania. They have stakes races throughout the season and offer special stakes races restricted to Standardbreds that were bred in Pennsylvania or sired by Pennsyvlania-based stallions.

Even on those days when you're too busy to get to the track, you can easily bet Pennsylvania racing through any of these recommended online racebooks.