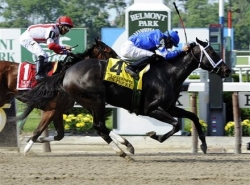 The horse racing industry in New York has grown into one of the most lucrative and successful in the United States. With expanded gaming fueling large purses, the best horses in the country can usually be found competing on the New York Racing Association (NYRA) circuit which consists of Aqueduct, Belmont Park and Saratoga. In Western New York, there is a smaller-scale Thoroughbred track – Finger Lakes. In addition to a booming Thoroughbred industry, there are several successful harness racing facilities.

Aqueduct, located in Ozone Park and opened in 1894, races typically from the late fall through April. Over the winter, the track switches to their inner-dirt main track and reverts back to the true main track in the spring. The track hosts several graded stakes races over their season, most notably the Wood Memorial (G1), a top-tier prep race for the Kentucky Derby. It is also home to Resorts World New York Casino, the first legal casino in New York City.

Belmont Park is home to two separate meets. Their Spring Meet runs from May into July and then the track picks back up for their Fall Meet in September and October. The historic track opened in 1905 and is the site of the third jewel of the Triple Crown, the Belmont Stakes (G1). In addition to the Belmont Stakes (G1), the track hosts numerous Grade 1 stakes races and has been the venue for several Breeders’ Cup Championships.

Affectionately dubbed “The Spa”, Saratoga opened in 1863 and is one of the oldest operating racetracks in the country. With astronomical purses, the track attracts the very best of the sport to both train on the Oklahoma training track and to compete on the main track. Over the summer, the future stars are unveiled in their highly anticipated two-year-old races and the track also hosts several Grade 1 events including the Travers (G1), Alabama (G1) and Woodward Stakes (G1).

Located in the Western part of the state in Farmington, Finger Lakes opened in 1962 and holds live racing from April through November each year. The highlight of their racing season is the New York Derby, a stakes race restricted to horses bred in New York. In a further effort the support the local breeding industry, the track also puts on the New York Breeders’ Futurity.

Yonkers Raceway is a one-mile track and has been in operation since 1899. The facility is home to the Empire City Casino that holds live racing year-round, five-nights a week. It is one of the most active tracks in the state.

Minutes from the Thoroughbred track, there is also harness racing in Saratoga Springs. The track has been in operation since 1941 and conducts live racing from March through December.

Located in Hamburg, Buffalo Raceway races live from January through July each year. The first post is typically 5:00 or 6:00 p.m. but there are several days in the summer where the races begin at 12:30 p.m

Opened in the 1940s, Batavia Downs begins their live racing season in August and runs until the beginning of December. The track traditionally offers night racing and also is home to expanded gaming.

Live harness racing is held at Vernon Downs from the end of April until the first weekend in November.

Originally a Quarter Horse track, Tioga Downs converted their 5/8 of a mile track to host harness racing. Live racing season at Tioga begins in May and goes through September.

Even if you can't get to one of New York's many race tracks, you can still bet New York racing with an account at one of these excellent online racebooks.