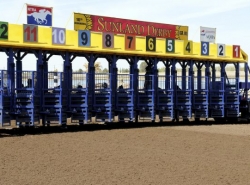 New Mexico has a rich history of horse racing and is home to several racetracks that offer both Thoroughbred and Quarter Horse racing. While some of these meets are exclusive to one breed, often times the tracks will host both simultaneously and, on occasion or at a fair, the breeds will even compete against each other.

Sunland Park opened in 1959, Sunland Park has been an important part of the history of national horse racing. Top jockeys such as Jerry Bailey and Pat Valenzuela began their impressive careers in New Mexico. In 1999, the state allowed slot machines to be put in at the racetrack and that offered a much-needed boost to their revenue, allowing them to offer more competitive purses. Sunland Park runs from December through April and their top Thoroughbred race is the Grade 3 Sunland Park Derby, a race which offers points towards a spot in the Kentucky Derby.

Opened officially in the 1950s, Ruidoso Downs holds both Thoroughbred and Quarter Horse racing and the track operates live racing from May to September. The focal point of their season is the $3 million All American Futurity which is the richest two-year-old race in the world and the largest purse in Quarter Horse racing. In addition, the other marquee race is the $2.5 million All American Derby.

The Downs at Albuquerque operates live racing from June to the beginning of September. There is both Thoroughbred and Quarter Horse racing featured though the emphasis is on Quarter Horses.

Zia Park, located in Hobbs, races in the Fall from September through the second week of December. The track races both Quarter Horses and Thoroughbreds and is supported by the addition of slot machines and electronic table games.

SunRay Park, located in Farmington, races from April through June. The track hosts primarily Quarter Horse racing and holds several stakes races throughout their season with incentives for horses bred in New Mexico.

If you can't get out to enjoy a day at the races, you can still enjoy the races, by wagering through one of our recommended online racebooks.