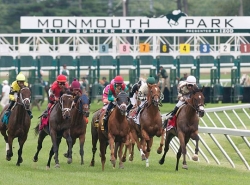 New Jersey, by way of Atlantic City, has been a gaming pioneer throughout history. The state is home to top class Thoroughbred and harness racing. In 2015, however, the doors shuttered for good on one of the icons of the state’s horse racing landscape – Atlantic City Race Course. The track, which had opened in 1946, had been on life support for the past several years. The property will likely be developed in the coming years. New Jersey remains a pioneer in the gambling industry and the horse racing industry is subsidized by profits online gaming as well as casinos.

Known as the “Shore’s greatest stretch” the track opened in 1870 briefly under the name Long Branch Racetrack. It closed its doors in 1894 and was revived in 1946 by the Monmouth Park Jockey Club. Since then, it has been a mainstay on the Jersey Shore. The track races from May to September and the highlight of the racing season is the prestigious Haskell Invitational (G1). The race has drawn some of the champions of the sport including Big Brown, Rachel Alexandra, and Triple Crown winner American Pharoah.

Meadowlands Racetrack hosts both harness racing and Thoroughbred racing though the track is primarily used for harness. There is harness racing year-round at the track which is located in East Rutherford, just minutes from MetLife Stadium. The track opened in 1970 and “The Big M” has been the home of the Hambletonian, the first leg of the Trotting Triple Crown and one of the most heralded races for Standardbreds, since 1981.

Even if you can't get to the track, you don't have to miss betting all the big New Jersey races if you have an account in an online racebook.