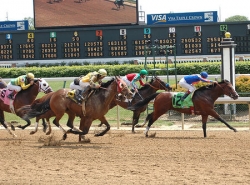 Pair-mutuel wagering has been legal in Nebraska since 1935 and while horse racing is not an abundant industry in the state, there are several historic tracks still operating. In 2016, there are racing dates scheduled at four separate racetracks located throughout the state that span from February to the middle of September.

The leader of the state’s racetracks, Fonner Park, is located in the center of the state and has hosted live horse racing since 1953. The racing season begins in February and offers roughly 30 days of live racing that runs through the beginning of May. The track hosts several stakes races over the course of their season with the most prestigious being the $75,000 Gus Fonner Stakes which is contested at a mile and a sixteenth.

Known as Ag Park, this venue is a multi-purpose fair facility which has held live racing since 1942. The track was originally only a half mile but was eventually expanded to 5/8 of a mile. There is the capacity to house over 1000 horses on the grounds as the site is also home to horse shows and livestock fairs. In 2016, they have been granted 16 days of live racing.

Located in Omaha, Horsemen’s Park is a relatively new addition to the Nebraska racing landscape and opened in 1998. The track is 5/8 of a mile and is owned and operated by a the Nebraska Horsemen’s Benevolent Association. In 2016, they will race 5 days – May 20-22 and July 29-30.

Lincoln Race Course is scheduled to race only one day – September 8 – in 2016. By law, a track must race at least one day to keep simulcasting rights and in 2014, the track did just that – one race, one day and the race was only one furlong.