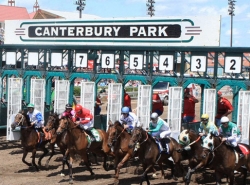 Horse racing is alive and well in the state of Minnesota. While the state is not home to a big name track or a major race, the small Thoroughbred industry, as well as the harness racing industry, are both aided by expanded gaming and are continuing to do well despite industry trends.

Canterbury Park opened in 1985 and typically operates live racing from May through September. The track hosts numerous stakes races throughout the racing season and offers generous purses of up to $85,000 in their state-bred restricted races for horses bred in Minnesota which supports the local breeding industry. The marquee event at the track was the popular “Claiming Crown” which had been held at Canterbury Downs since its inception but the series of races has been moved to Gulfstream Park through 2018. Unlike many tracks in the country, Canterbury Park has witnessed a steady increase in attendance over the years in addition to experiencing rising purses.

Harness racing is held in Minnesota at Running Aces located in Columbus. The live racing season begins in May and is held until the beginning of September with the “Night of Champions” being the final event of their meet. The track opened in 2008 and the track is 5/8 of a mile. In addition to live racing, the track offers a full casino.

For those days you can't get to the track but still want ot bet a big race, having  an account in an online racebook is the always a great option.