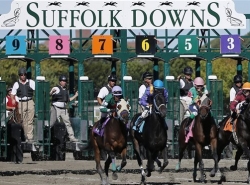 The history of horse racing in the state of Massachusetts is a long one and dates back to the 1930s. There were, at one time, seven separate fairs that made up the fair circuit in Massachusetts as well as the massive stalwart, Suffolk Downs. As time went on, the fairs one by one dwindled away with the final fair, Northhampton, holding their last race meet in 2005. Suffolk Downs, on a tenuous lifeline, is the last active Thoroughbred track remaining in all of New England.

Suffolk Downs was built in only 62 days when the state legalized pari-mutual wagering in 1935. Since then, the track has been the host of some of the biggest names in Thoroughbred racing history including Seabiscuit, John Henry and Cigar. In addition to marquee names in horse racing, the track was also the site of the Beatles final United States appearance in 1966. After a long struggle to bring expanded gaming to the state of Massachusetts, Suffolk Downs lost the bid to get a casino license in 2014 and it was announced that the track would close. However, Suffolk Downs hosted a three-day boutique meet in 2015 and has plans for a six-day boutique meet in 2016 with an agreement to continue into at least 2017.

Located in Plainville, Massachusetts just minutes away from the New England Patriot’s Gilette Stadium, Plainridge Park is the lone harness racing track in Massachusetts. Opened in 1999, the track is now bolstered by expanded gaming in the state and has slot machines on site. They race live from April through November.

Live horse racing has not been held at the Brockton Fair since 2001. Prior to that, the 5/8 of a mile track had been a mainstay on the summer fair circuit from 1956 to 1972 and was briefly revived in 2001. Owner George Carney announced plans to bring back live Thoroughbred racing to Brockton for the summer of 2016.

You'll never mis a day of Massachusetts horse racing even if you can't get to the track when you have an online betting account with one of our recommeded partners.