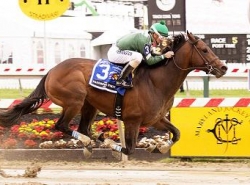 The Maryland horse racing industry has undergone some ups and downs throughout the course of history but is currently experiencing revitalization thanks to the revenue from expanded gaming in the state. The breeding industry has begun to pick up and the racetracks in the state offer significant incentives for horses bred in Maryland.

Laurel Park opened in 1911 and has hosted Thoroughbred racing since then. The track has both a turf course and a dirt main track and is currently owned and operated by The Stronach Group. There are several graded stakes races held annually, including the De Francis Memorial Dash which is a prestigious Grade 1. The track also highlights the state breeding program with Maryland Million Day, an entire day of racing devoted to state-bred horses with lucrative purses. Laurel Park hosts live racing year round.

Pimlico Race Course, affectionately referred to as “Old Hilltop” was opened in 1870 and is the second oldest racetrack in the country. The track is made up of a one mile dirt oval which surrounds a seven-furlong turf course. Like neighboring Laurel Park, Pimlico is owned by The Stronach Group and is the host site of the second jewel of the Triple Crown, the Preakness Stakes (G1). The track traditionally races in May and June.

Timonium has been part of the history of Maryland racing since 1879 and is home to the historic state fair. The track hosts live racing during that time and at other times during the year, the facility is used by Fasig-Tipton to showcase horses available at auction.

The premier harness racing facility in the state, Rosecroft Raceway opened in 1948. After falling on hard times, the track closed in 2010 but was reopened in 2011 with an agreement to continue racing for the next several years.

Ocean Downs will begin their 67th season of live harness racing in 2016. The track is located near Ocean City and opened its doors in 1949. The track also has slot machines and table games.

Betting the races in Maryland is as easy as opening your computer if you have an account in one of our recommended online racebooks.