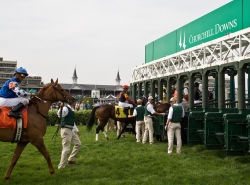 Kentucky is synonymous with horse racing and the state is the very epicenter of the industry in the United States. There are five tracks that host Thoroughbred racing and three that hold harness racing so there is something for every racing fan practically year-round. While the biggest event in Kentucky is of course the Kentucky Derby, there are major stakes races for horses of every division throughout the year and the state has also been the home to the Breeders’ Cup on several occasions.

Live racing is held beneath the Twin Spires for three separate meets. The Spring Meet runs from April 30 to July 2 and the season is centered around the Run for the Roses which is held on the first Saturday in May. The second meet runs from September to the beginning of October and the Fall Meet is held from the end of October through the end of November. One of the highlights of the Fall Meet is the Clark Handicap, a Grade 1 event for older horses that is held after the Breeders’ Cup.

One of the most popular tracks in the current, Keeneland is home to two prestigious racing seasons. Their spring meet is held throughout the month of April and the fall season takes up the month of October. The track is home to some of the most important races in the country including key prep races for both the Kentucky Derby (G1) and Breeders’ Cup races. In 2015, the track hosted the Breeders’ Cup World Championships for the first time and it was very successful.

Turfway Park is one of the last remaining tracks in the country to operate with a synthetic racing surface and because of that, the track is able to race in the winter without the concern of the track freezing. The track holds live racing from New Year’s Day through April and again throughout the month of December.

Located in Henderson, Ellis Park holds a summer racing season from July 2 through Labor Day each year. There is both turf and dirt racing held at the track and their marquee event is the Groupie Doll Stakes, a Grade 3 event that was renamed in honor of the champion mare with local connections.

Though the track only operates a handful of racing dates throughout the month of September, they offer astronomical purses and attract some of the best horses from around the country as well as pack the stands with racing fans. The biggest race of their season is the Kentucky Turf Cup, a Grade 3, mile and a half turf race with a purse of $600,000.

Located in Lexington, Kentucky just minutes from Keeneland, Red Mile hosts live harness racing from July to October each year. The track was founded in 1875 and is the second oldest harness racing facility in the world.

Bluegrass Downs was awarded 15 racing dates for 2016 and will run over a one-month period from June to July. Typically, first post is at 4:00 p.m.

Located in Prestonburg, Thunder Ridge is scheduled to hold live harness racing from the middle of April to the end of May with a first post of 6:00 p.m.

You can't always get to the track, and OTBs aren't an option in Kentucky, but you can still bet all the big races if you open an account in an online racebook.