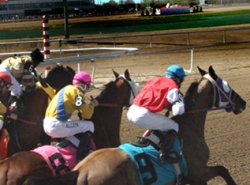 The horse racing industry in Indiana supports Thoroughbred, Standardbred and Quarter Horse racing. The track did take some time to legalize pari-mutuel wagering and it became legal in 1989. Hoosier Park was the first racetrack to open in the state and in 2002, Indiana Downs joined the horse racing landscape. The industry now benefits from expanded gaming in the state which fuels purses and adds incentive for breeders to stay in the state as there are generous incentives for Indiana-bred horses.

Opened in 1994, Hoosier Park was the first track in the state of Indiana and the following year, the track held the inaugural running of the Indiana Derby. In 2008, the track re-opened as a “racino” after slot machines were installed. The track now hosts harness racing for Standardbreds and conducts their live racing meet from April through October. They host several stakes races both for Indiana-bred Standardbreds and open company and the track is slated to host the Breeders’ Crown in 2017.

Formerly Indiana Downs, Indiana Grand is home to both Thoroughbred and Quarter Horse Racing. The live racing season begins in April and runs through the end of October. The biggest event of the season is the Indiana Derby which is Grade 2 event for Thoroughbreds and offers a purse of $500,000. There are several other major stakes races that day as well and the event is typically scheduled in the middle of July.

A trip out to an Indiana race track isn't always possible, but you can still bet Indiana racing with an account in an online racebook.