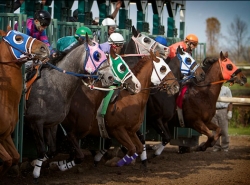 With thoroughbred and a harness racing tracks, the state of Illinois has long offered racing fans around the country a recognizable and enjoyable product. Despite changing economic conditions and state legislation that has been unfavorable to the racing industry in recent years, the Illinois racing circuit maintains an important position in the regional and national market with the tracks remaining popular among handicappers.

As the state’s signature track, Arlington Park hosted the 2002 Breeders’ Cup and annually hosts a trio of significant turf races that regularly attract international talent; these races include the Grade 1 Arlington Million, Grade 1 Beverly D Stakes, and Grade 1 Secretariat Stakes. The popular gelding John Henry, now represented by a statue overlooking the paddock, won the first running of the Arlington Million in 1981. The track also hosts the popular Arlington Million Preview Day, featuring a bevy of local preps for its aforementioned signature races. Arlington has been in operation since 1927 enduring a 1985 fire that completely wiped out its grandstand. The structure was completely rebuilt and reopened in 1989.

Established in 1891, Hawthorne is the oldest continually-run and family-owned racetrack in the country with marquee races such as the Grade 2 Hawthorne Gold Cup, Grade 3 Illinois Derby and Grade 3 Hawthorne Derby carrying the banner for the host track. Hawthorne’s fall and spring meet typically run between October and April remain popular among horseplayers. Hawthorne also conducts harness racing throughout the year.

Located on the Missouri state line in Collinsville, Illinois and part of the St. Louis metro area, Fairmount once hosted as many as 232 live racing days in the late 1990’s, but has seen that number dwindle to less than a third. The track was once home to the St. Louis Derby which was won by the notable Lawyer Ron in 2006.

The next best thing to being at the track is having the convenience of betting your favorite Illinois race track through an online racebook.