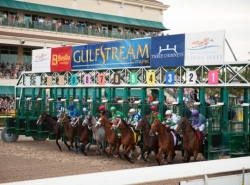 There is a rich history of horse racing in Florida and the state offers a diverse landscape of Thoroughbred, Quarter Horse and harness racing. With the advent of expanded gaming in the state coupled with year-round warm weather, horse racing is a year-round industry in Florida.

Gulfstream Park opened its doors in 1939 and has continued to grow from there. Now one of the premier racetracks in the country, Gulfstream Park also operates as a racino with slot machines. Live racing is held at their annual meet from December through April and features key races such as the Florida Derby (G1) and Donn Handicap (G1). Racing continues from April through October as their Spring/Summer meet.

Calder Racecourse opened in 1971 and as of 2014, was absorbed by Gulfstream Park and operates their two-month meet in the fall at Calder as “Gulfstream Park West”.

Tampa Bay Downs opened in 1926 and currently holds live racing from November to early May each year. The track is the only Thoroughbred track on the West Coast of Florida and, with competitive purses and large fields, continues to attract quality horses, top horsemen and many fans.

Hialeah boasts one of the most storied histories in Florida. Originally opened in 1921, the racetrack was the site of many of the greats in the sport. In 2001, due to increased competition from the nearby Gulfstream Park and then-Calder Race Course, the track was forced to close. In 2013, the track was revived and is now the home of Quarter Horse racing as well as the flock of flamingos that live there. Racing is held from December through February.

Harness racing has been held in Florida at Pompano Park since 1964. Racing is held for ten months of the year cumulatively with some time off during the hottest parts of June and August.

If you can't get to one of Florida's racetracks, you can still bet Florida horse racing through one of these top online racebooks.