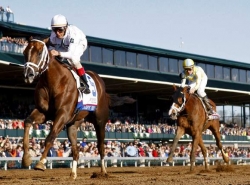 When racing hit Arkansas in 1905, the new game in town was so big that opening day at Oaklawn Park was declared a state holiday, drawing over 3000 people.  Centered in Hot Springs, Arkansas, Oaklawn Park was subjected to political whims and anti-gambling laws throughout its early years, but wheathered the storm to become the southwestern racing capital of the United States that it is today.

While the state of Arkansas has just a single racetrack, Oaklawn Park is one of the true jewels of thoroughbred racing. Open since 1905, Oaklawn Park has seen its popularity wax and wane throughout its years of operation, but took off in the 1960’s with the inception of the Arkansas Derby – the track’s signature race to this day and one the regularly attracts leading Kentucky Derby contenders. In the 1970’s track marketing executives dubbed the week before the Arkansas Derby, which features at least one stakes race per day, “The Racing Festival of the South.” With one racing meet a year, held from January-April, Oaklawn is widely considered one of the top betting tracks in the country despite only offering dirt racing. Major stakes races held annually at Oaklawn include the Grade 2 Rebel, Grade 2 Southwest, Grade 1 Arkansas Derby, and Grade 1 Apple Blossom Stakes.

If you can't get to Oaklawn, you can still bet Arkansas racing with an online betting account!