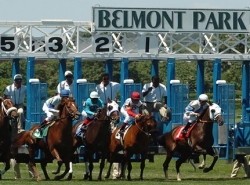 New York State has a long and strong association with off-track betting. In fact, New York City became the first outside of the state of Nevada to offer OTB. Since the 1950s, the city’s mayors, among others, had been lobbying the state to allow OTB. Voters in the Big Apple supported an OTB referendum in 1963, but it wasn’t until 1970 that the state legislature finally passed a law allowing the creation of off-track sites.

In 1971 the New York City Off-Track Betting Corporation began operations; by the late 1980s, there were an estimated 200 bricks-and-mortar betting locations.  After years of declining profits, the last OTB location in New York City closed in 2010. Since then, some devoted handicappers have made the trip across the Bayonne Bridge to New Jersey, where a betting parlor named Winners was established in 2013 to lure aficionados of the Sport of Kings from the Empire State: it’s a short drive from Staten Island, and a shuttle van service had been established to operate twice a day on weekdays (three times per day on the weekends).Home simulcast racing is also prominent, having first started in 1995.

If you can't find a New York OTB, you can still bet the races with one of these online racebooks.