Off Track Betting Locations in Illinois 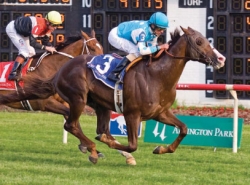 Illinois has a long relationship with thoroughbred and harness racing, dating back to the 1830s. According to the Chicago Tribune, "Illinois used to be one of the nation's premier horse-racing destinations... It was home to several champion horses, including 1948 Triple Crown winner Citation, who was once based at Arlington Park. But since the legislature legalized riverboat gambling in 1990, the state's horse-racing tracks have struggled, operators say. Revenue generated at the tracks has been in decline since 1992."

The mid-2010s have seen continued contraction of horse racing courses and off-track betting facilities. The Illinois Racing Board decided to close Maywood Park raceway, located in suburban Melrose Park, in 2015 after almost 70 years as the state's first harness-racing venue. Balmoral Park in Crete also held its final slate of harness races in December 2015, having been mired in Chapter 11 bankruptcy for more than a year. In January 2016, All Seasons OTB announced the closure or relocation of several outlets, including At the Post in Elk Grove, the Iron Horse in Lockport, Jupiter's in Champaign, the Turf Room in North Aurora and the Saddle Room in Hoffman Estates.

If you can't find an Illinois OTB, you can still bet the races with one of these online racebooks.

Despite all that, horse racing and OTB continue to be strongly represented in the Land of Lincoln, with Arlington International and Hawthorne Race Course as well as Fairmount Park. OTBs remain open in Chicago (Trackside at Joe's Bar, and Corliss) and outside the Windy City: Time Out in Alton, the Foundry in Aurora, McQ's Sports Sports Dome in Bolingbrook, Crestwood OTB, Shark City in Glendale Heights, Trackside at Salerno's in Hodgkins, Modena OTB and Prospect Heights are some of the remaining options. Simulcast races are available at most of the major venues, and wagers on events such as the Arlington Million can also be handled by our preferred sportsbooks.