Off Track Betting Locations in California 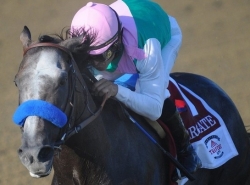 California legalized pari-mutuel wagering on horse races in 1933 with an amendment to its constitution; with that impetus, more than a half-dozen major tracks, including Santa Anita and Bay Meadows, and about 30 off-track betting establishments had sprung up in what would become known as the "Great Race State."

Things are somewhat different these days. Hollywood Park, founded by Warner Brothers film executive Jack Warner in 1938, closed in 2013. On its grounds in Inglewood a stadium is being built (completion date: 2019) to house the NFL's Los Angeles Rams, which moved back from St. Louis in 2016. Bay Meadows closed in 2008.

If you can't find a California OTB, you can still bet the races with one of these online racebooks.

On the plus side, Santa Anita Park is still going strong as southern California's longest continuing operational track. North of San Diego, Del Mar has experienced a renaissance in recent years with more attendance and higher handles. Part of that can be attributed to the Stronach Group, which has provided financial and technical support, as well as a shift in marketing strategy focused on "star power" and selling experiences away from the track. While Cypress at Los Alamitos and Fairplex Park in Pomona have undoubtedly seen better times, they continue with limited race days. Golden Gate Fields, in the San Francisco Bay area, is the last major track located in northern California.

While you won't find any off-track betting bureaus in Los Angeles itself, there are a broad range of outlets from Albany to Victorville. Many OTBs in the Golden State are located at fairgrounds, such as: the Shasta District Fair in Anderson; Humboldt County Fair in Ferndale; Sonoma County Fair in Santa Rosa; the Solano Race Place in Vallejo; and the California State Fair in the capital, Sacramento, among others. Many of these facilities also have simulcast racing available.

More action is yours for the betting at our approved racebooks.

The Derby Club at Ventura