Off Track Betting Locations in Arkansas 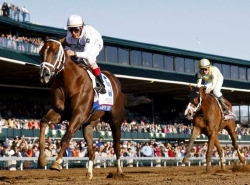 The home of thoroughbred horse racing in the state is Oaklawn Racing & Gaming (formerly Oaklawn Park Race Track) in Hot Springs. It hosts the Racing Festival of the South and the Arkansas Derby, and is considered a premier American venue because of the incredible number of champions and Horses of the Year whose hooves have pounded the one-mile dirt oval track.

Opened in 1905, Oaklawn started enjoying unprecedented popularity after World War II; by 1965, the Arkansas Derby became a race with high enough stakes ($50,000 at the time) that attracted top prospects for the Kentucky Derby. In 1972 the stakes rose to $100,000; the following year saw the inagural running of the Fantasy Stakes, a Grade II lead-in race to the Kentucky Oaks.

For its 100th anniversary in 2004, Oaklawn offered a $5-million bonus to any horse which could win its Derby along with the Rebel Stakes and the Kentucky Derby; Smarty Jones collected the prize. Other famous horses which have run at Oaklawn include the last Triple Crown winner American Pharoah, Sunny's Halo, Elocutionist, Afleet Alex, and Curlin.

In 2008, Oaklawn underwent a $3-million upgrade which included slot machines, poker tables, simulcast wagering and "Instant Racing," which allows punters to bet on historical replays of horse races which have already run. The expansion turned Oaklawn into the largest gaming complex in Arkansas at the time.

The Horseplayers Association of America premiered a rating system in 2013 for 65 thoroughbred tracks in North America; the list recognized Oaklawn as seventh-highest. In 2016 Oaklawn boasted a $7.55-million stakes schedule, overseen by the Arkansas State Racing Commission. Live thoroughbred racing is held from January to April; Arkansas currently has no off-track betting facilities, but our preferred sportsbook partners can handle your action for races at Oaklawn and elsewhere in the world.

If you can't find an Arkansas OTB, you can still bet the races with one of these online racebooks.