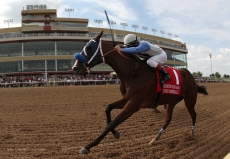 On Friday at Remington Park, the featured race is the $50,000 Silver Goblin Stakes. Restricted to horses bred in Oklahoma, the six and a half furlong contest has drawn a field of eight colts and geldings.

Topping the field at 9-5 on the morning line is Z Rockstar for trainer Donnie Von Hemel. A five-year-old son of Rockport Harbor bred and owned by Robert Zoellner, he finished in a dead heat for the win in the Silver Goblin Stakes last year with rival Okie Ride who he will face again. The graded stakes placed gelding has won eleven times, four of which have come this year. Luis Quinonez will be aboard and they will break from the rail.

Okie Ride is the second choice on the morning line at 5-2 for trainer Kenneth Nolen. The seven -year-old gelded son of Candy Ride will be making his fourth appearance in the Silver Goblin. He won the 2013 and 2012 editions and finished third in 2011. He was second as the favorite in his most recent start and has been training sharply since. M. Clifton Berry will remain aboard and they are slated to break from post seven.

Appealing Style back in form after layoff

Also in the field and a longshot at odds of 20-1 is Appealing Style for trainer William Bret Calhoun. Purchased for $25,000 in 2011, the four-year-old son of Successful Appeal made his career debut a winning one in 2013. After two allowance efforts, he went to the shelf and returned this year off of a year-long layoff with a victory. He was third against allowance company last out and will make his stakes debut under jockey Glen Murphy.