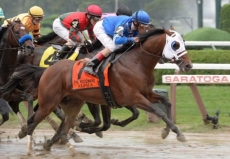 It's hard not to like Frosted going into the 2016 Woodward, and the oddsmaker agrees, making the Keiren McLaughlin trainee the heavy 1/2 favorite. The runner-up in last year's Belmont Stakes has won three of four so far this year, including his last two. Although not the toughest best field, he simply walked away with the (G1) Metropolitan Handicap in June, and then came back to beat a much tougher field in the (G1) Whitney at Saratoga six weeks ago. He gets a cutback in distance here, and jockey Joel Rosario should be able to out him wherever he wants early coming from the #3 post.

It's likely he'll be breaking just behind the veteran Bradester (6-1) who has three wins in his last three starts, and who has only been out of the money once in eight tries going back more than a year. From the inside post, former Queen's Plate winner Shaman's Ghost (12-1) won the Brooklyn Invitational with a rail trip two starts back and he'll likely get the same here. After tiring last out in the Suburban Handicap he'll get first-time lasix for the Woodward. Another in double-digits at 10-1 is Samraat, who has a pair of graded-stakes runner up efforts recently, but who hasn't had a win in quite some time. Of the longer shots, Breaking Lucky (20-1) has a string of in-the-money finishes at Woodbine, but is taking a step up in class here.