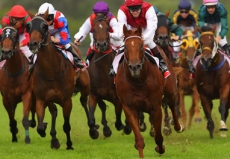 The $125,000 Tiara is the third of eight Claiming Crown races scheduled Saturday, December 6 on the opening day card at Gulfstream Park as a field of 14 is set to contest the mile and one sixteenth race on the turf course.

The Tiara, limited to fillies and mares that have started in a claiming race of $25,000 or less since January 1 of 2013, is led by 3/1 morning line favorite Wild Swava, winner of seven of her last ten races with seconds in each of the three non-winning efforts.  The Michael Maker trainee won her last race October 29 at Indiana Downs against a field of $25,000 optional claimers.  The four year-old gray or roan daughter of Offlee Wild shows two local works at Gulfstream Park since that effort and appears to be adjusting nicely to her south Florida surroundings.

At 4/1, New York shipper Flamingo Lane will receive the services of jockey Julien Leparoux after losing by just a nose against $67,000 allowance foes November 5 at Aqueduct.  Before that effort, the Abigail Adsit trainee was beaten a head in a $32,000 optional claiming event.  In her last seven starts, Flamingo Lane has four wins and three second place finishes.  She should be the beneficiary of a comfortable stalking trip behind the early leaders.

Price could be right on Dun Won

Dun Won (10/1) should be available at a tempting price, and has done some nice running over the local green for trainer Manual Wayar.  In eight local starts on the Gulfstream turf, Dun Won has three wins including two at or above the $35,000 allowance level.