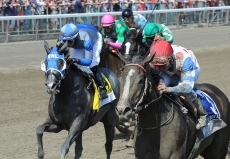 On Thursday at Saratoga, the featured race is the $100,000 Union Avenue Stakes. Restricted to fillies and mares foaled in New York, the race will be contested at six and a half furlongs on the main track and has drawn a field of ten.

Willet headlines the competitive field as the morning line favorite at odds of 2-1 for trainer James Iselin. A seven-year-old daughter of Jump Start, the veteran mare has won nine of her 23 starts and will be making her third appearance in the Union Avenue Stakes. After a runner-up effort in2012, she won the 2013 edition. She has been on the shelf since winning the Interborough Stakes in January and will have Joel Rosario in the irons from post position seven.

Second choice at 5-1 on the morning line is Make the Moment for trainer and owner Charleton Baker. A five-year-old daughter of Indygo Shiner, the dark bay mare is a six-time winner and will be trying to earn the first stakes win of her career. She was second last time out in the Dancin Renee Stakes and is scheduled to break from post position two under jockey Irad Ortiz, Jr.

Tricky Zippy getting a class test in stakes debut

Also in the field at morning line odds of 6-1 is Tricky Zippy for trainer James Jerkens. A three-year-old daughter of City Zip, she has been on the board in five of her seven starts and is a three-time winner. She comes into this race off of back to back victories against allowance company and will be stepping up to stakes company for the first time with John Velazquez aboard from the outside post.