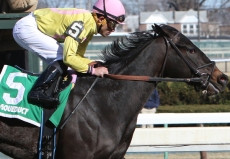 On Saturday at Belmont Park, the track will host the 85th running of the $750,000 Acorn Stakes. A Grade 1 race for three-year-old fillies, the one mile contest has attracted a field of twelve.

Shook Up has been installed as the morning line favorite in the wide open field at odds of 7-2 for trainer Steve Asmussen. The runner-up in the Kentucky Oaks (G1), she has been on the board in five of her six starts and has one win to her credit. A gray daughter of Tapit, she has been training at Belmont Park since her last race and is scheduled to break from post position eight under regular jockey Robbie Albarado.

Condo Commando back in her home state

Second choice at 4-1 on the morning line is Condo Commando, a locally-based filly trained by Rudy Rodriguez. A dark bay daughter of Tiz Wonderful, she has won five of her seven career starts and is a three-time graded stakes winner. She will be trying to rebound after finishing ninth in the Kentucky Oaks (G1) and has had a bullet workout since that race. Joel Rosario will be in the irons and they will break from post seven.

Also in the field at morning line odds of 10-1 is Curalina for trainer Todd Pletcher. A chestnut daughter of Curlin purchased for $125,000 as a yearling, she will be making her stakes debut and has won two of her three starts. She was last seen winning an optional claiming race as the favorite over seven rivals at Churchill Downs.  She will have John Velazquez aboard and they will break from post position six as she goes for her third straight win.