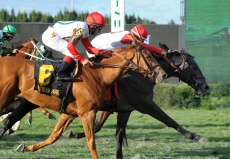 On Saturday at Gulfstream Park, the track will host the 18th edition of the $100,000 Kitten’s Joy Stakes. Restricted to three-year-olds, the one mile turf race has attracted a full, international field of twelve colts and geldings.

The morning line favorite in the wide open field is Dr No (GB) at odds of 3-1 for trainer Graham Motion. A gelded son of Aussie Rules, he began his career in Great Britain as a juvenile and made his stateside debut in December at Gulfstream with a fourth-place finish against optional claiming competition. He is trying to earn the first stakes win of his career and will have Rajiv Maragh in the irons from post position seven.

Bill Mott will saddle Dubai Sky, second choice on the morning line at 4-1, as he makes his stakes debut. A bay son of Candy Ride (ARG), he broke his maiden in his second career start last September and followed that up with a dead heat for the win against an optional claiming field that included Dr No. He has been training steadily for his first start of his three-year-old season and will have John Velazquez back aboard from post four.

Chief Kitten trying to win race named for his sire

Also in the field at morning line odds of 9-2 is Chief Kitten for trainer Chad Brown. Bred and owned by Ken and Sarah Ramsey, the gray son of Kitten’s Joy has been on the shelf since earning the first stakes win of his career in November in the Pulpit Stakes. He has been on the board in three of his four starts with two wins to his credit. Edgard Zayas, the pilot for his victory last time out, will be back aboard and they will break from post nine.