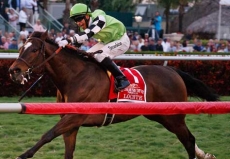 On Sunday at Monmouth Park, the track will host the $150,000 Oceanport Stakes. Scheduled to be run at a mile and a sixteenth on the turf, the Grade 3 event has drawn a field of seven colts and geldings with one additionally listed as an also-eligible.

Heart to Heart tops the field as the morning line favorite at odds of 2-1 for trainer Brian Lynch. A four-year-old son of English Channel, he was Canada’s champion three-year-old in 2014 and has won five of his fifteen career starts. A multiple graded stakes winner, he is trying to rebound after a seventh-place finish in the Poker Stakes (G3) at Belmont Park last time out.

Kharafa a consistent and legitimate contender

Second choice at 5-2 on the morning line is Kharafa for trainer Tim Hills. A six-year-old gelded son of Kitalpha, he is a ten-time winner and a multiple stakes winner. He will be trying to earn his first graded stakes win and comes into this race off of a victory in the Elkwood Stakes at Monmouth Park. He has two wins from three starts this year and will have Paco Lopez aboard from the outside post.

Also in the field at morning line odds of 3-1 is Lochte for trainer Marcus Vitali. A five-year-old son of Medaglia d’Oro, he is a six-time career winner and is a Grade 1 winner. He has gone winless in his last four starts against stakes company and was second in the Elkwood Stakes last time out. He will have regular rider Orlando Bocachica in the irons and they will break from post six.