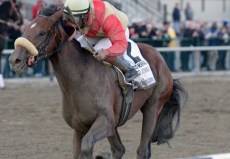 The $150,000 Forbidden Apple is the featured race July 11 at Belmont and features a particularly intriguing cast with several classy veterans set to clash in the one-mile turf event.

Reload, the 5/2 morning line favorite for trainer Shug McGaughey will break from the rail under jockey Javier Castellano after winning his last three starts. The six year-old son of Hard Spun returned from a three-month layoff May 22 to win an allowance race at Belmont following his Grade 3 Stakes triumph in the Canadian Turf Stakes February 22 at Gulfstream. Reload has won 6 of 18 career starts, but will be challenged by a capable field as he seeks his fourth straight trip to the winner’s circle.

Grand Arch has plenty of class

Grand Arch (3/1), is a grade 2 winner on grass, and has the most turf class of the group. The Brian Lynch trainee ran an impressive second to two-time Horse of the Year Wise Dan in the 2014 Grade 1 Shadwell Turf Mile, and won an allowance race at Keeneland in April before finishing sixth in his last start – the Grade 1 Woodford Reserve Turf at Churchill Downs.

Wicked Strong (5/1), was a well-known face on the 2014 Triple Crown trail and won both the Grade 1 Wood Memorial and  Grade 2 Jim Dandy last year, but has disappointed in a trio of tough stakes races in 2015 prompting his connections to try the grass. A son of Hard Spun, Wicked Strong is well-bred to handle the turf and figures to offer his backers a reasonable price.