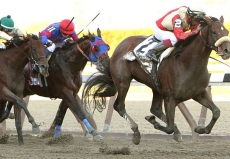 On Saturday at Aqueduct, the featured race is the $200,000 Excelsior Stakes. A Grade 3 contest carded at a mile and a quarter on the main track, the race has attracted a competitive field of eight colts and geldings.

Wicked Strong, one of two horses in the race for trainer James Jerkens, tops the field as the even-money favorite on the morning line. A four-year-old son of Hard Spun owned by Centennial Farms, he will be making his second start of the year and attempting to move forward after finishing fourth in the Gulfstream Park Handicap (G2) in his first start back off of a six-month layoff. Regular rider Rajiv Maragh will be aboard and they are scheduled to break from post position seven.

Second choice at morning line odds of 5-1 is North Slope for trainer Kiaran McLaughlin. A five-year-old son of Elusive Quality, he is a multiple stakes winner and is trying to earn the first graded stakes victory of his career. He was third last time out in the Stymie Stakes after a win in the Evening Attire Stakes two starts back. Junior Alvarado will be in the irons and they will break from post position four.

Also in the field at morning line odds of 6-1 is Micromanage, one of two horses that Todd Pletcher will saddle. A five-year-old son of Medaglia d’Oro, he is a seven-time career winner and will be trying to earn the second graded stakes victory of his career. He has been fourth in his last two starts, both against stakes competition, and will break from the rail under Javier Castellano for Repole Stable.