Whittling Down The Field in 2016 Belmont Stakes 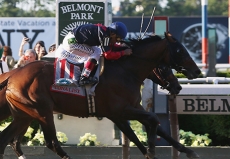 In a competitive renewal of the Belmont Stakes, the 2016 edition feature a contentious group with very few complete throw-outs. "Throw-outs" however, are essential to the handicapping process and some fine-line decisions must be made in the days leading up to the race. Here are a few logical reasons to toss these contenders:

At 10/1 on the morning line, it's not exactly stepping out on a ledge to eliminate Creator. In fact, it wouldn't be surprising to see the Steve Asmussen trainee to go in the starting gates at double those odds considering the colt's penchant for finding traffic and complete lack of early speed. Creator may have won the Grade 1 Arkansas Derby, but keep in mind the ideal pace setup he received and the fact that it took this runner six tries to break his maiden. This is a nice horse, but not one for our Belmont cash. Not really looking for this guy to hit the board either considering the likelihood of a dawdling pace.

Brody's Cause likely a lost one

Brody's Cause (20/1) is also a throw-out for very similar reasons to the ones listed for Creator. With a top Beyer Speed Figure of just 91, this colt has a serious case of the slows and projects nearly as far off the early pace as Creator. There's also the grim reality that this horse is 2 for 3 at Keeneland and 1 for 4 everywhere else. That would all be OK if they were running the Belmont in Lexington.

Cherry Wine and a host of others don't impress

Then there's Gettysburg (30/1) who probably gets the early lead, but certainly won't last. Cherry Wine (8/1) will be a popular play after finishing second in the Preakness, but he is a mudder who loved the sloppy track and also received a perfect setup to nip Nyquist for the place spot. Toss both these runners. Ditto for Forever d' Oro (30/1), Trojan Nation (30/1) and Lani (20/1) who've simply never looked like grade 1 animals at any point during their careers. As noted writer/gambler Damon Runyon once mused, "the race doesn't always go to the swiftest....but that's the way to bet."