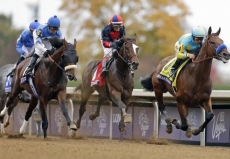 Coming in off a superb performance in the Metropolitan Mile, Frosted (3-5 in ML) has been made the solid choice in a small Whitney field full of graded-stakes winners. In the one-turn Met, Frosted enjoyed a rail trip early behind quick fractions through the first 3/4 mile, and then simply took over, running the last quarter in 23:37 to win by more than 14 lengths. A repeat performance in his second start in the US after a two-race trip to Dubai should put him in the winner's circle again.

If the fact the Whitney goes two turns over the slower Saratoga dirt gives a reason to try and beat him, Effinex (7-2) might be in with a shot. If you toss his race two back when he had a terrible start and never really got into the race, the runner-up in the 2015 Breeders' Cup Classic never runs a bad race. He was a winner last out in the (G2) Suburban at Belmont, and should benefit from a cutback in distance for this one. Upstart (10-1) ran third in the Met Mile, a distance probably a bit less than he likes, and will be comng late to try and get a piece. Noble Bird (10-1) has shown he gets his best results when he can get to the lead early, and will try to hold off the top two as long as he can.