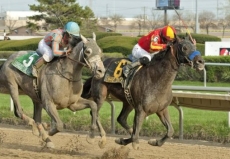 On Saturday at Thistledown, the featured race is the 81st running of the $500,000 Ohio Derby. Scheduled to be run at a mile and a sixteenth, the stakes race has drawn a field of nine colts and geldings.

Bob Baffert will saddle the undefeated Whiskey Ticket as the morning line favorite at odds of 3-1 in the competitive field. Purchased for $200,000 as a yearling, the dark bay son of Ghostzapper is a perfect two-for-two and made his stakes debut a winning one last time out in the Illinois Derby (G3). He has been training forwardly since that race and will have Martin Garcia in the irons as they break from the inside post.

Divining Rod back after good effort in Preakness

Second choice at 7-2 on the morning line is Divining Rod for trainer Arnaud Delacour. A dark bay son of Tapit, he has been on the board in all six starts and was last seen finishing third behind Triple Crown champion American Pharoah in the Preakness Stakes (G1). Prior to that, he earned his first graded stakes victory in the Lexington (G3). Julian Leparoux will be aboard and they will break from post position four.

Also in the field at morning line odds of 9-2 is Far Right for trainer Ron Moquett. A ridgling son of Notional, he has won three of his ten starts and has been on the board a total of eight times. He has been freshened up since finishing fifteenth in the Kentucky Derby (G1) and has two wins from four starts this year. Ricardo Santana, Jr. will be aboard and they are scheduled to break from post position two as he tries to earn his fourth win.