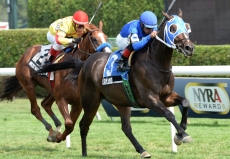 On Saturday at Aqueduct, the featured race is the $125,000 New York Stallion Series. The seven-furlong contest, restricted to state-bred company, has drawn a field of ten colts and geldings.

West Hills Giant has been installed as the morning line favorite at odds of 8-5 for trainer John Terranova. A four-year-old son of Frost Giant, he has won four of his nineteen starts and is a multiple state-bred stakes winner. He was second in this event last year. While winless from five starts this year, he has hit the board three times and was last seen finishing third at Belmont Park. He has had a bullet workout since then and will have Irad Ortiz, Jr. in the irons from the rail.

Readthebyline claimed back by Michelle Nevin

Second choice at 5-1 on the morning line is Readthebyline who will be making his first start for trainer Michelle Nevin after being claimed for $40,000 after an eighth-place finish on the turf. A six-time career winner, the gelded son of Read the Footnotes has one win from seven starts this year. Jose Ortiz, aboard for her most recent victory in May, will be back in the irons and they are scheduled to break from post position six.

Also in the field and a longshot at 12-1 on the morning line is Gridley Here for trainer Ken McPeek. Purchased for $60,000, the dark bay son of Repent has won three of his nine starts and comes into this race off of a two-race win streak. He has delivered as the favorite in his last two starts and will be trying to earn the first stakes win of his career.  Luis Saez will be in the irons for the first time and they will break from post position seven.