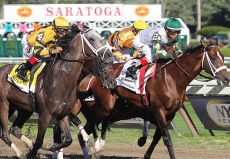 On Saturday at Fair Grounds, the featured race is the $60,000 Pan Zareta Stakes. Restricted to fillies and mares, the six-furlong contest has attracted a field of five.

Thirteen Arrows tops the compact field as the morning line favorite at odds of 9-5 for trainer Larry Jones. A four-year-old daughter of Indian Charlie, she is out of the graded stakes winning mare Stop Traffic and is a half-sister to Grade 1 winner Cross Traffic. The bay filly has won five of her nine starts and is coming out of her first stakes victory in the Zia Park Distaff. Mitchell Murrell will be aboard and they will break from the inside post.

Second choice at morning line odds of 2-1 is House of Sole for trainer Roger Brueggemann. A four-year-old daughter of Limehouse bred and owned by Scarlet Stables, the consistent filly has been on the board in all ten of her starts and is a three-time winner. She is trying to earn her first black type victory and was second last time out in the Dream Supreme Stakes at Churchill Downs. Colby Hernandez will be aboard and they will break from the outside.

Also in the field at morning line odds of 4-1 is Super Saks for Hall of Fame trainer D. Wayne Lukas. A three-year-old daughter of Sky Mesa, she was purchased for $250,000 as a yearling and has won four of her fourteen starts. She is coming into this race off of back to back wins and was last seen earning her first stakes victory in the Dream Supreme Stakes. Robby Albarado will be aboard and they will break from post position two.