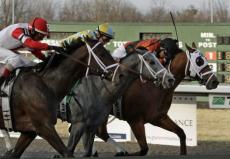 On Sunday at Woodbine, a field of seven Canadian-bred sophomores are entered to compete in the $150,000 Plate Trial, which serves as a key prep race for the first jewel of the Canadian Triple Crown, the Queen’s Plate on July 6. The race will be contested at a mile and an eighth over Woodbine’s All Weather track. The Plate Trial goes as the ninth race on Sunday's 11-race card.

Headlining the field as the 3-5 morning line favorite is Kentucky Derby also-ran We Miss Artie. Though his tenth-place finish in the Run for the Roses was poor, he is a perfect two-for-two over synthetic surfaces for trainer Todd Pletcher. Jockey Javier Castellano will be aboard the three-year-old son of Artie Schiller for owners Ken and Sarah Ramsey.

Second choice at 4-1 is Tower of Texas, a six-figure yearling looking for his first stakes win for trainer Roger Attfield. The son of Street Sense broke his maiden in his sixth career start and was last seen finishing fourth, beaten only a length, in the Marine Stakes. Gary Boulanger will be in the irons and will try to guide him to victory from off the pace.

Rounding out the top three contenders is Man O’ Bear (6-1), a son of Corinthian for Reade Baker who will be making his first start of the year. He was stakes-placed as a juvenile and has been training forwardly for his return to the races. Jockey Emma-Jayne Wilson has the call. From five total starts, he has been on the board in all four over synthetic surfaces.