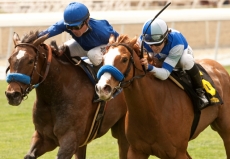 On Saturday at Los Alamitos, the track will host the $200,000 Great Lady M Stakes. A Grade 2 event for fillies and mares, the six and a half furlong contest has attracted a field of nine.

Warren’s Veneda has been tabbed as the morning line favorite at 2-1 on the morning line for trainer Craig Lewis.  A California-bred daughter of Affirmative, the five-year-old mare has won eight of her 24 starts and is a multiple graded stakes winner. After three consecutive victories early in the year, she has been third and second in her two most recent starts and is cutting back to a sprint. Joe Talamo will be in the irons and they will break from post position seven.

Second choice at 5-2 on the morning line is Sunday Rules for trainer Philip D’Amato. A four-year-old daughter of Tribal Rule bred and owned by Nick Alexander, she is undefeated from five starts and will be stepping up to graded stakes competition for the first time. She won the Spring Fever Stakes at Santa Anita last time out and will have Tyler Baze aboard from post position five.

Also in the field at morning line odds of 7-2 is Fantastic Style for trainer Bob Baffert. A three-year-old daughter of Harlan’s Holiday, she has won three of her five starts and comes into this race off of her first stakes win, a front-running score in the Angel’s Flight Stakes. She will be competing against older rivals for the first time and will have Rafael Bejarano aboard from post position six.